Someone asked me if I could extract some images from a popular Chinese mobile game. I accepted the challenge, but things were far more complicated than I expected.

I thought I could extract assets I needed with existing tools (e.g. Disunity) but I was proved wrong. Disunity has been refactored, and remaining work is still in progress (at least the moment I write this article). Since resource extraction has not been implemented at this moment, Disunity couldn’t be my choice.

Then I turned to a tool called Unity Assets Bundle Extractor. It did a great job extracting resources I needed graphically. However, acquiring thousands of texture assets from 2000+ isolated files is not an easy job. I tried the command line support but failed (maybe I was too stupid).

Luckily this toolkit provides some API and documentation. Since it was compiled with Microsoft Visual C++ 2010, I was unable to use it directly(C++ ABI constantly changes with every MSVC release). And I was too lazy to write a C wrapper for P/Invoke. But these C++ header files point to a perfect solution - parse file and implement my own UnityFS parser/reader.

Special thank to the UABE project - without these generous header, I would not be able to implement my own parsing and compose this article.

UnityFS was a new asset bundle format introduced in Unity 5. I am not a Unity3D developer, and I absolutely didn’t know why Unity introduce a new bundle format. But anyway, let’s analyze it.

Things you need to know

So the header goes like this. There’s a DWORD flags data that matters - it contains some critical information required for decompression and directory parsing. The rule goes like this:

C# provides a good BinaryReader that makes things a bit easy. But it can be improved for better Null-terminated String and Big Endian support. Be careful with endianness. Unity utilizes both Big Endian and Little Endian in a single file and personally I didn’t get this. For the sake of convenience, I extended the original BinaryReader for these support. Length of each data type matters - but that’s a basic stuff for CS students. 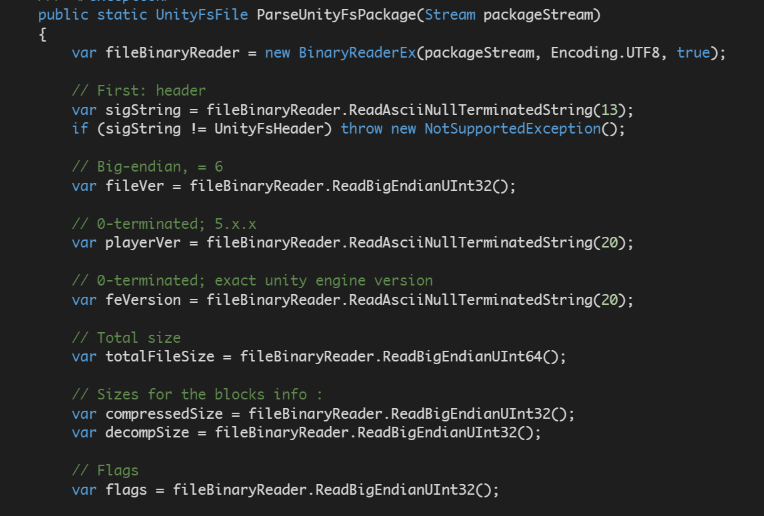 Code snippet of my simple parser

UnityFS uses optional block-based compression for streaming (you can read a specific bundle without downloading the whole file). Both LZMA and LZ4* (LZ4Hc, etc.) are supported. The Unity’s proprietary parser and Disunity respects this design. But I just wanted these bundle files, so I decided to read all blocks at once and decompress into a single memory stream.

Decompressed size should match what you get. If not, something must happened.

You can implement your own block-based reader - but my time budget didn’t allow me to do this.

There we go…block and file information!

With sufficient information we retrieved, we were able to extract raw asset files from a UnityFS bundle. Then what you need is search the Internet for ideas of extracting objects(text resources, 2D texture, etc.) from Unity assets. Good luck on exploring!

In this article, we discussed structure and parsing of UnityFS resource bundle file. For more information about UnityFS and Unity asset files, please research these projects I mentioned in this article.