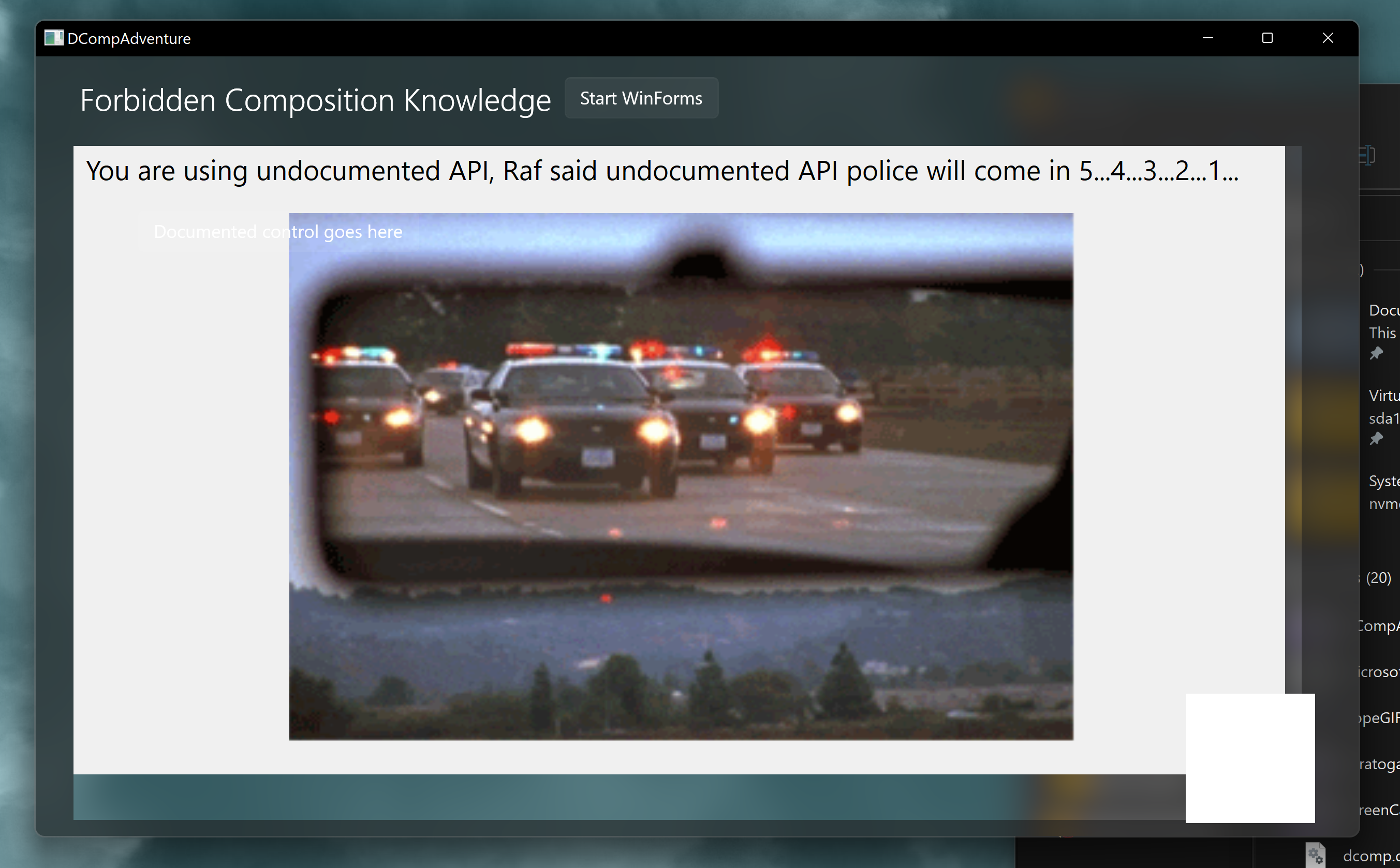 During the development of an undisclosed personal project, I encountered a scenario that requires HWND hosting on the XAML surface. While a few alternative approaches are available, I decided to proceed with the Microsoft.UI.Composition route for the best performance. However, this is not an officially supported scenario. Some discussion has existed since 2020, but it remains not formally supported at the time of writing. However, the underlying infrastructure for HWND hosting already exists; just a little bit of reverse engineering effort is required.

Some Alternatives, and Why not

The usage is straightforward - pass in an HWND owned by the process, get an IUnknown back, call IDCompositionVisual::SetContent to put it into a visual, and commit the visual tree. While the interface and method exist in the undocked DirectComposition (Microsoft.UI.Composition), the required infrastructure supporting HWND Bitmap hosting is stripped. Indeed it’s possible to create a separate IDCompositionDevice and IDCompositionVisual from the platform DirectComposition and place them over the top of the XAML surface. However, since the dedicated DComp device has no visibility into XAML visual tree, it makes XAML visuals behind the HWND hosting visually invisible.

To get started with SystemVisualProxyVisualPrivate, a few undocumented classes need to be activated manually. Below are their interfaces:

Now proceed to the platform compositor side: follow the procedure outlined in this blog post to get a Windows.UI.Composition.Compositor and IDCompositionDesktopDevice concurrently. From platform compositor, QI to get IPartner (9CBD9312-070d-4588-9bf3-bbf528cf3e84) and call OpenShardTargetFromHandle to retrieve IVisualTargetPartner instance.

Using the IDCompositionDesktopDevice to perform the required operations getting surface and visual from HWND. QI it to retrieve Windows.UI.Visual instance. Finally, set the wrapped visual as the root visual from the IVisualTargetPartner we retrieved earlier (and also remember to set visual size and scaling), commit changes from both the platform and undocked Compositor.

The full demo code is available at here.

While this solution works for my case, it might not be a generic solution for everyone. The following are known limitations:

Thanks for ADeltaX for getting some IIDs for me, and Rafael Rivera for the idea in the screenshot.